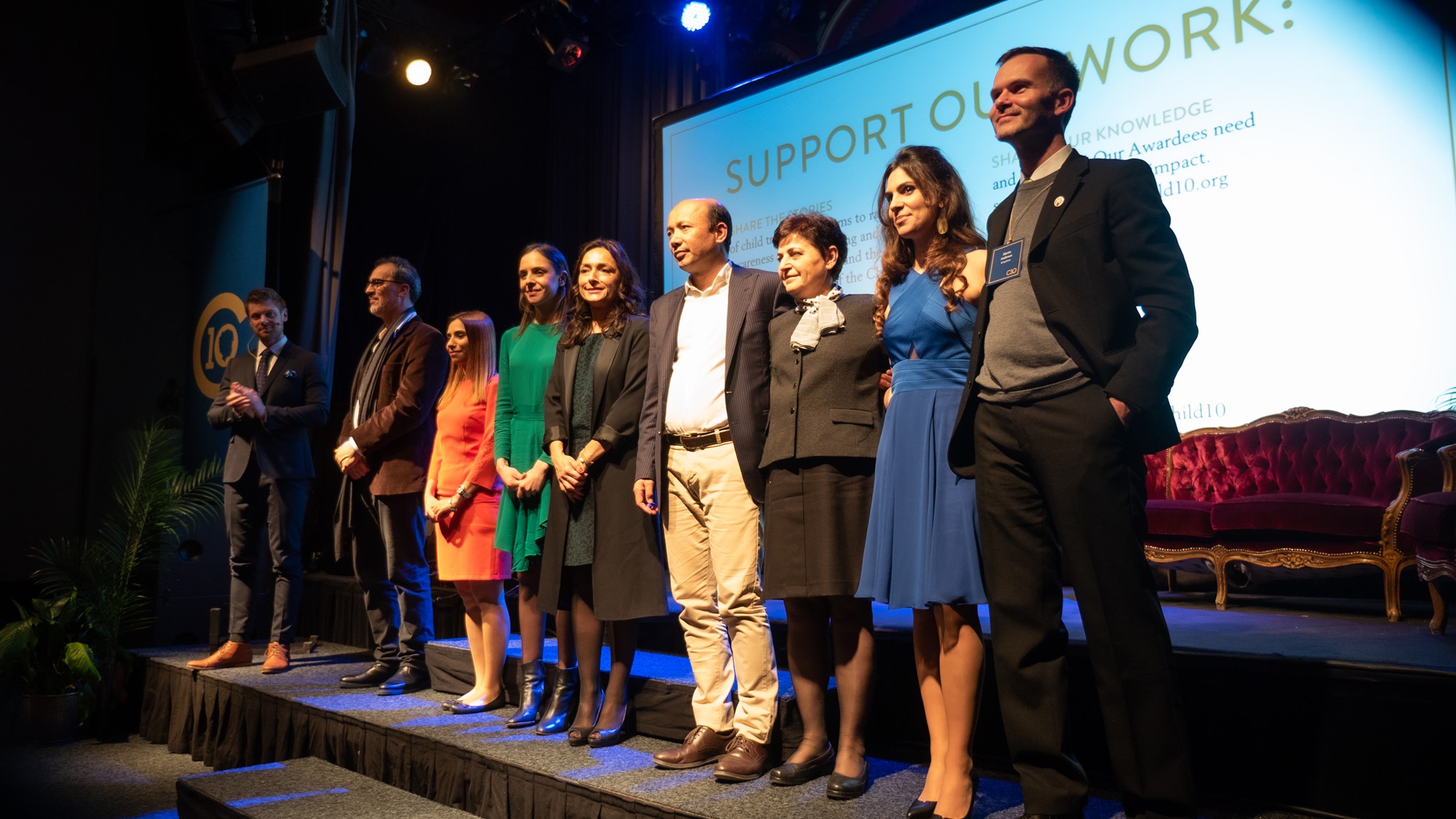 Tens of thousands of children forced to flee towards Europe during the last few years have either been exposed to or are at great risk of being exposed to child trafficking and exploitation. Closed borders, lack of cross-national coordination and the dire and inhumane living conditions in refugee camps and child-care centers put children at particularly high risk of becoming victims of trafficking, forced labor, human smuggling, criminal activity, and sexual exploitation and abuse. Today, thousands of children are in danger of disappearing and becoming untraceable in transit and destination countries towards Europe. As countries tighten their borders, children are forced to find other, often more dangerous routes towards Europe, increasing the risk of exploitation from smugglers and traffickers.

Every year, Child 10 gathers and awards ten exceptionally bold individuals from around the world for their everyday struggle for the most vulnerable children in our communities. The aim is to recognize their brave and relentless struggle to protect and prevent child abuse, exploitation, and violations, and to share their stories. Today, on the European Union’s Anti-Trafficking Day, Child 10 is announcing the 2020 Child 10 Awardees under the theme ‘Children in the hands of Europe’ for their strong commitment to combat child trafficking.

The 2020 Awardees are ten exceptional child rights advocates. Despite hostile environments, threats and a growing racist discourse these extraordinary leaders should function as role-models for all of us. Their strong commitment to prevent children from exploitation and trafficking and to always protect the most vulnerable in our societies transcends beyond their organizations and to all of us. We are very proud to welcome the 2020 awardees to Sweden in January, says Jacob Flärdh, Secretary General Child 10.

The Awardees will be participating in an award ceremony and high-level summit in Malmö, Sweden, in January 2020. The summit will be the starting point for the joint work that the Child 10 group will undertake in order to raise awareness and combat the risk of child trafficking and sexual exploitation and abuse on migrant routes to Europe.

The ten Awardees will each be awarded with a grant of 10,000 USD as well as a support program to strengthen, develop and create sustainability in their organization. The Awardees will furthermore join forces throughout 2020 in their advocacy and outreach work to draw attention to and prevent trafficking and sexual exploitation of children.

‍Martin Anderson has dedicated his career to improving the lives of refugees, including at-risk refugee children. Under his leadership as the Director of International Programs at RefugePoint, Martin and his organization have developed child protection and resettlement programs in Northern African countries among others to identify refugee children in need of resettlement and other services, helping to ensure they have access to the support programs and lasting solutions they need and, in many cases, are entitled to.‍

Rouguiatou Diallo and her organization ADEPE Guinea has saved thousands of children from the deadly risks of migrating from Africa to Europe through the Mediterranean Sea by supporting them to stay in their home countries. With her relentless devotion to helping these extremely vulnerable children, her work has reached far beyond her country.‍

‍Glauco Iermano and his organization DEDALUS in Naples, Italy, have supported more than 4000 unaccompanied minors over the last ten years. Under the leadership and commitment of Glauco, children and youth are guided towards a path of legality, inclusion and opportunity, protecting them from the risk of being trafficked or exploited. By focusing on the integration of young migrants, Glauco wants to build a society where the "foreigner" is considered a resource and not a threat.

‍Lourdes Reyzabal, and her organization Fundación Raices, helps children and youth to gain access to their rights in Spain, focusing in particular on unaccompanied minors. Lourdes is an extremely strong advocate for children, highly dedicated to the struggle against the failed governmental child protection system, seeking to ensure that all children are protected according to their rights.‍

Ezgi Yaman is a highly committed child protection advocate. Her organization, The NGOs Network Against Commercial Sexual Exploitation of Children in Turkey/ECPAT Turkey, is focused on training children to protect themselves, providing them with crucial knowledge how to identify traffickers and where to get help and find protection from them. Ezgi believes that change can be made through a combination of advocacy, working with government officials and engaging in on-the ground support to the most vulnerable children.‍

Sofia Kouvelaki is the CEO of The Home Project, which has established and ensured the sustainability of 11 shelters for refugees, creating jobs for refugees and renovating property with a beneficial social purpose in mind, helping not only refugees, but also the Greek population. As a leader in the humanitarian aid sector, Sofia is tentative to the sector specific needs of her staff, and she truly believes in creating a sustainable systematic change for her staff, the neighborhood, the community - and most of all - the children.

‍Nantina Tsekeri is a strong and committed advocate for children’s rights. In her role as the Director of the organization Defence for Children International Greece, she and her team provide direct legal services and support to children in urgent need. With her strong child-rights perspective, Nantina is a great role model for children’s rights advocates and lawyers all over the world.‍

Nandi D. Zulu is the founder and executive director of Action Pro Sierra Leone, an organization she created to strengthen the work against child trafficking. Under her leadership her organization has prevented many children from becoming victims of trafficking, exploited and abused on their way to Europe.  She is a humble and selfless leader focused on the wellbeing of her colleagues and the work of her organization.

‍Yonous Muhammadi is a passionate child protection advocate who himself arrived in Greece as an unaccompanied minor from Afghanistan in 2001. As the President of The Greek Forum of Refugees, he has been instrumental in organizing the different national communities for refugees in Greece giving them a strong joint voice in their work with empowerment, advocacy, awareness-raising, rights protection and networking.