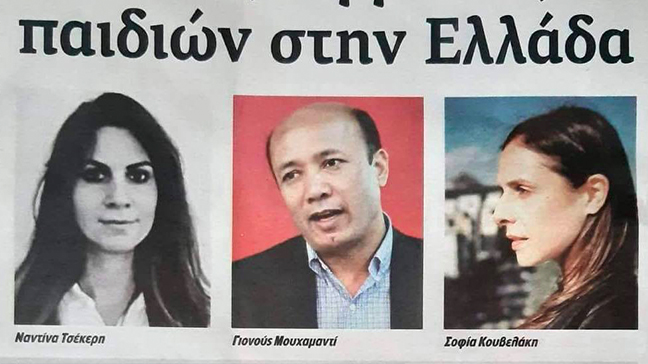 Three human rights defenders in Greece are among the ten awardees of Child 10 Foundation, for their unstoppable fight against child abuse, trafficking and sexual exploitation: Nantina Tsekeri, the Director of Defence for Children InternationalGreece, Yonous Muhammadi, the President of Greek Forum of Refugees, and the head of the organization “The Home Project”, Sofia Kouvelaki.

The award ceremony will take place on January 2020 in Malmo, Sweden, the base ofChild 10, an organization that was established on 2014, aiming to support and strengthen vulnerable children. The awardees will each receive a fund of 10.000dollars and will cooperate with each other, trying to get the best possible result regarding the urgent issue of protecting thousands of unaccompanied refugee children.

“The organization awards, every year, 10 exceptionally brave human beings, from allover the world, for their everyday struggle to protect the most vulnerable children, and prevent them from being maltreated and be taken advantage of,also being exposed to juvenile delinquency. We choose people that are committed in finding and implementing solutions that aim (to fill) the existing gaps in the field of protection and, through intervention and precaution measures, they fight against the danger of child exploitation”, Jacob Flärdh, the GeneralSecretary of Child 10 states. He also adds “ Given the cross-boarder character of trafficking, the cooperation between the countries of passage and reception countries is crucial for child protection, as well as the decision making in a global level, that will focus on fighting this massive danger.”

Defence for Children International Greece offers legal aid to children that were forced to flee their countries to go to Europe and they either live in really difficult environments, like refugee camps and detention centers, or they are forced to go through dangerous paths to go through the closed borders of EU. “It is extremely important, at this specific period of time that so many unaccompanied children travel while being “invisible”, that there is a strategic plan on behalf of actors that have the power and the means to accent this issue in a European level and also to be a better treatment for children that are victims of trafficking, during their immigration journey. We will cooperate with organizations from other Mediteranean Countries and it is so important for us to be a part of this attempt”, Nantina Tsekeri theFounder&Director of Defence for Children Int. Greece states.

The issue of child protection is the highest priority for the President of the Greek Forum of Refugees, Yonous Muhammadi, since he has experienced himself the conditions they face. “In 2001, when I first came in Greece, I had two choices, either sleep in the park or in police detention centers, with so many other children. At this point, so many children are practically invisible, and the number is increasing in really worrying levels, as worrying as the dangers they face: sexual exploitation, trafficking, drug dealing. For this reason, this award gives me the strength to keep trying, but it doesn’t make me that happy, since these problems still exist”, Yonous Muhammadi, highlights.

The General Director of The HOME Project an Organization that is active regarding the construction of shelters for unaccompanied children and the cover of mental health and integration needs. She mentions that, this award comes as a global recognition and that her ambition is “to create healing environments for unaccompanied children, as well as the local communities that receive them, in order to build multicultural communities that work in a positive way for everyone. As for the cooperation, Sofia Kouvelaki mentions:“Yonous Muhammadi has direct access to refugee and migrant communities. For us, it is really important to work there. Nantina Tsekeri is an expert in legal support, an area with many needs, either regarding the asylum applications, as well as the family reunification cases. For this reason, I think we have a lotto offer each other”.